You have probably heard about Canada Prime Minister Justin Trudeau moving to implement a freeze on handgun ownership.  President Biden is promising to do something along the same order, and once again the White House is sending out mixed messages (“the president doesn’t want to ban ALL handguns”).  Canada’s law intends to put a ban on buying, selling, transferring, and importing ALL handguns and extend ‘red flag’ laws.  Biden wants to ban “assault weapons,” extra-capacity magazines, “ghost guns” (home-made guns without serial numbers), and increase red flag laws, along with creating databases of gun owners and “stronger” background checks.

(Over this past holiday weekend, 53 people were shot in Chicago. Chicago has the strictest gun laws on the books in the nation.  Why can’t the liberals see the irony?? Because they don’t want to see it; they only want control.)

I’m going to go out on a limb here and say many, many people do not understand why the 2nd Amendment was written into the Constitution.  It had nothing to do with target shooting, trap shooting, or hunting.

“When the Founding Fathers wrote the Second Amendment, they had just finished a war to liberate themselves from tyranny. They didn’t just get back from a hunting trip. This is about your freedom.  Call it whatever you like, it’s still unconstitutional to take away Americans’ 2nd Amendment rights.”

I’ve always wondered why the first and second amendments weren’t included in one amendment, because it seems they are inextricably bound together.  Without one the other is meaningless, but it seems more so that the 2nd Amendment is the protector of the 1st Amendment.  Indeed, without the Second Amendment, the entire Constitution becomes vulnerable.

But the First Amendment is equally under attack.  Indeed the very beliefs of Christian Americans – and more specifically white Christians – are being likened to the same ideologies that have sought to stamp out Christianity over the centuries.

The Associated Press has “warned” America about “White Christian nationalism” and the impending threat to national security and social cohesion.  Titled “Christian nationalism on the rise in some GOP campaigns,” the article Sunday featured the remarks of Doug Mastriano during a victory celebration after he won the Republican primary in Pennsylvania’s gubernatorial race last week.

As other writers have cautioned, what the liberal Democrats (and the media) accuse conservatives and Republicans of doing is exactly what they are themselves doing.

“If Christian Nationalism isn’t essentially domestic terrorism then I don’t know what is. They simultaneously weaponize the Bible and the Constitution to justify their wanton disregard for the views and safety of others and their insatiable lust for weapons and violence,” she wrote.

But here is what I believe is the attack in a nutshell:

“We are in a do-or-die situation,” she wrote on her Medium.com page. “Non-believers must speak up now to roll back the tide of dangerous white Christian nationalism.

Washington Post columnist Jennifer Rubin said the GOP is no longer a political party but a movement to impose white Christian nationalism.  She said the media “blandly describes the GOP’s obsessions as ‘culture wars,’ but that suggests there is another side seeking to impose its views on others.”

What??  Which side is seeking to impose their views on the other??  Their accusation describes their actions.

I urge you to read the entire article.  If you’re like me, you will find it incredible and we all should find it frightening.

Here’s the playbook, written by Saul Alinksy.  He died in 1972, but his ideololgy lives in Socialism – and in the Democratic Party. 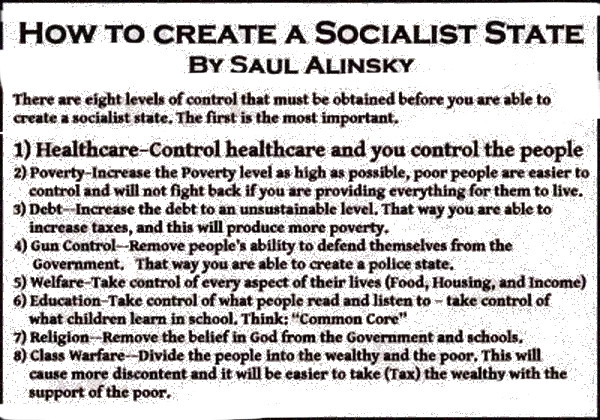 1)  Healthcare – Control Healthcare and you control the people.
2)  Poverty – increase the poverty level as high as possible, poor people are easier to control and will not fight back if you are providing everything for them to live.
3)  Debt – Increase the debt to an unsustainable level.  That way you are able to increase taxes, and this will produce more poverty.
4)  Gun Control – Remove people’s ability to defend themselves from the government.  That way you can create a police state.
5)  Welfare – Take control of every aspect of their lives (food, housing, and income)
6) Education – Take control of what people read and listen to – take control of what children learn in school.  Think:  “Common Core”
7)  Religion – Remove the belief in God from the government and schools.
8)  Class warfare – Divide the people into the wealthy and the poor.  This will cause more discontent and it will be easier to take (tax) the wealthy with the support of the poor.
Is any of this happening now??